Edgo is delighted to announce that the Ministry of Oil and Minerals has signed an environmental protection agreement with the British company BMT Cordah which is represented in Yemen by Safir Services Limited (SSL). SSL is a joint venture between the Edgo Group and the Hayel Saeed Anam Group.

The agreement provides for a study to evaluate the environmental effects of the current oil producing fields and for the determination of policies and standards. The Minister of Oil and Minerals, Mr. Ameer Salem al-Aydarous and BMT Cordah’s Principal Consultant, Stuart Hume, signed the historic agreement, the first of its kind in Yemen, on 29 June 2009. 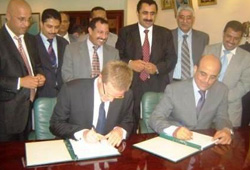 The agreement requires the surveying, categorising and managing of the chemical waste resulting from the oil and gas exploration process. It also provides for the training of personnel in environmental studies and occupational safety.

Minister al-Aydarous stated that the agreement aims at creating a complete national system and he also noted that this is in line with the directives issued by the President of Yemen. These state that Yemen should move to protect its environment from the exploration and production of oil and gas and also endeavour to execute projects that contribute to the development of local communities.