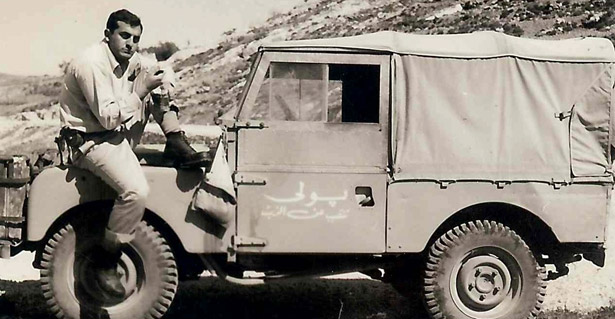 From a small company to an international pioneer

The Edgo story started in the early 1950s when Angela C. Kegler and Munib R. Masri met at the University of Texas in Austin where both teenagers were sophomores. Munib had travelled to the USA from Nablus, Palestine to study geology.

Angela was born in Lubbock, Texas and attended high school further south in Wink where she graduated as the valedictorian of her class. Angela went on to study petroleum geology, following in the footsteps of her father George Everett Kegler, a seasoned oilfield engineer, who worked on pump stations and pipelines in West Texas and Eastern New Mexico for Conoco and Humble Oil, the forerunner to ExxonMobil.

After marrying and both graduating as petroleum geologists in 1956, Angela and Munib started their journey back to the Arab world. They drove to New York and set sail on the Swedish freighter Concordia to Beirut, Lebanon.

After two months on the high seas and overland, they arrived in Amman, Jordan where they both embarked on their first jobs – the geological mapping of Jordan and Palestine. Munib and Angela also founded the Jordan office for Geological and Engineering Services which later evolved into the Engineering and Development Group, or Edgo for short. In parallel, Munib worked with E.W.Pauley, a Phillips Petroleum company, and was made President of Phillips in Algeria in the early 60s and then President of Operations for the Middle East and North Africa region.

Edgo’s future started taking shape when it began offering hydrogeological services, drilling activities and land development, as it expanded geographically down into the Arabian Peninsula.

The founders’ aim was to contribute to the infrastructural development needs of the Arab world with a focus on meeting the challenge of providing water; a resource which was crucial to the region’s social and economic development.

For decades, Edgo focused on delivering large complex water well drilling projects in the Levant and Arabia. During the 1960s and 70s the water supply wells that were drilled were instrumental in the development of globally significant cities including Riyadh, Abu Dhabi, Dubai and Muscat. The quality of service delivered in these projects coupled with its resilience, experience and attention to protecting the environment led Edgo to becoming the most reputable and largest water well drilling contractor in the region.

Building on this success, Edgo expanded during the 1970s and 80s into the oil, gas and power industries providing construction and technical support services.

Half a century later, with an impressive track record, in-depth experience, local partners and complementary technology partners, Edgo is now able to deliver integrated service solutions to the energy markets with a focus on oilfield services and logistics support in 35 locations in 23 countries across the Middle East, Africa and Asia.