In an effort to strengthen cooperation and support for the Al-Quds Fund and Endowment, a delegation from the fund visited Kuwait and held a series of high-level meetings. The delegation was headed by the Chairman of the Board of Trustees, HRH Prince Turki Al-Faisal, and Chairman of the Board of Directors, Mr. Munib R. Masri, Dr. Hiba Ahmed, Director General of the Islamic Solidarity Fund for Development of the Islamic Development Bank, as well as Dr. Imad Abu Kishek, Mr. Omar Masri, Mr. Taher Al-Disi and Mr. Muhammedin Weld Umah. 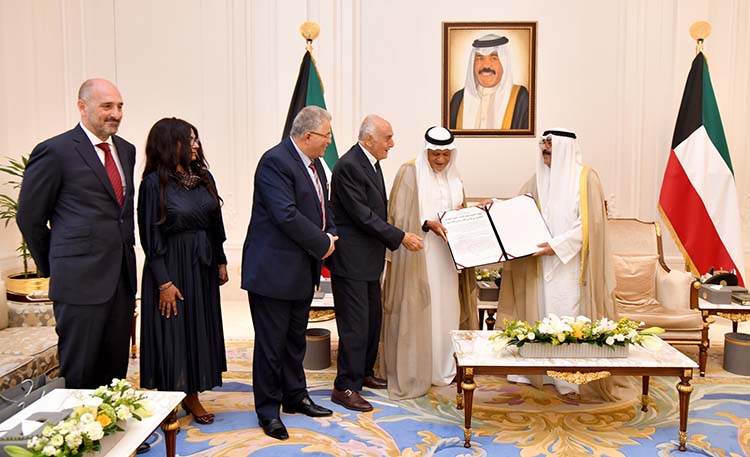 During their visit to HE Sheikh Ahmed Nasser Al-Mohammed Al-Sabah, Minister of Foreign Affairs and Chairman of the Board of the Kuwait Fund for Arab Economic Development, the delegation reviewed the challenging situation in Palestine and the reality of daily life for Jerusalemites. His Excellency highlighted the importance of economic empowerment in the face of occupation and human suffering.

The delegation held fruitful discussions with their counterparts at the Kuwait Chamber of Commerce and Industry, headed by its Chairman, Mr. Mohammed Jassem Al-Sager. Mr. Al-Sager stressed that “the Palestinian cause and Jerusalem are matters of principal and pertinence for the Kuwaiti people and its government as much as they are to Palestinians and Arabs.” Mr. Al-Sager also affirmed his great pride that the Chamber of Commerce and Industry has always been at the forefront of those supporting Palestine and its people.